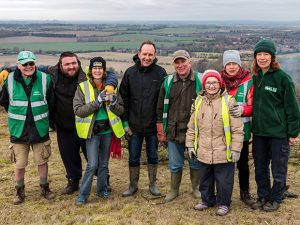 To celebrate the 20th anniversary of setting up the first TCV Green Gym in Sonning Common, South Oxfordshire, the pioneering group hosted a giant work session on Thursday 8th February at Watlington Hill Nature Reserve. This was joined by other local Green Gyms and staff from TCV.

The Green Gym was the brainchild of Dr William Bird, then at Sonning Common Health Centre, who brought in nature conservation experts TCV to set up the first group in 1998.  That group has prospered, holding two weekly sessions with a total of 40 active members, some of whom have been there from the beginning. There are now 130 Green Gyms all over the country.

I love going out in the fresh air and getting stuck into scrub-cutting or whatever task we’re doing that day.  Catching up with the other members is also a big plus!

Sonning Common is now an independent Green Gym run completely by a team of dedicated and energetic volunteers. The group enjoy working outdoors, learning new skills and helping to rescue or preserve important wildlife habitats and, of course, the social side of group activity.

William Bird attended the event and was delighted to see how the group has grown over the last 20 years. Craig Lister the Managing Director of TCV's Green Gym gave a short speech which shared how the Green Gym movement (now international) is growing and its role in the NHS's Social Prescribing Programme.

“I love going out in the fresh air and getting stuck into scrub-cutting or whatever task we’re doing that day.  Catching up with the other members is also a big plus,” said Gill Vaughan, a founder member.

Craig Lister said: "TCV's Green Gym brings us back to the natural environment in which we evolved and excelled. Through collaborative effort we can not only achieve great things, but also create enhanced community resilience, improvements to individual health and wellbeing and leave a lasting legacy on our environment for future generations. It was an honour to work with members of the founding Green Gym and hear so many stories of how Green Gym has helped people for 20 years."

Watlington Hill NR has been a regular site for Sonning Common Green Gym, who received an award from the Chilterns Conservation Board for their restoration of an ancient sunken way running through the Reserve.  This is just one of the two dozen nature reserves, commons and wetland sites Sonning Common Green Gym visits in their twice-weekly sessions.